The new Australian federation was felt to have been ratified by participation in the war.

Ever since, we have rushed to volunteer troops for overseas service, in support of a great and powerful friend. That was a simple statement of contemporary legalities. Nor has this impulse been confined to the conservative side of politics alone. He did not have the approval of the full Cabinet, and his was a rather broad interpretation of a Security Council resolution.

Similarly Tony Abbott, in the way conservative leaders somehow manage to coincide their Washington visits with first-class crises, easily slid in into offering our support in Iraq. Since then, of course, troops have been despatched. Of course, such a commitment is helping an ally. There is no strong commitment to military aid in the event of attack, just consultations.

And so we have to demonstrate our attachment to America again and again, to prove our worthiness. The assumption is abiding affinity, a convergence of interests — as was assumed in the British Empire at its peak.

‘Dig, dig, dig, until you are safe’: constructing the Australian trenches on Gallipoli

The corollary is that we have no sixth sense, as other countries do, of how their activities will be read internationally. The sending of troops overseas, effectively beginning with the Boer War, has induced in us a sense of always being secondary players — with diminished responsibility. Sharing some premises with British embassies, as is planned, will only strengthen the perception that basically we behave like a satellite. Of course, it is justified on economic grounds as cost cutting. That is precisely the kind of folly that happens when countries think of and describe themselves as economies, rather than nations.

As sport looms ever larger in Australian life — the Christian citadel of Good Friday has just fallen to the AFL — so too has there been some convergence with the military.

For some time now, there has been a special Anzac Day football match — televised complete with advertisements recruiting for the army. Military and sporting consciousness seem to have accelerated together in recent years. The effect is that Australians seem to be slipping into regarding war as sport with guns. This attitude was implanted, loosely, by the cheery departures of the colonial contingents to the Boer War.

It has subsequently taken root because, while Australia was attacked during World War II, no actual engagement has been fought on Australian soil.

War for us has always been a series of away matches. But now that our soldiers have fought in places such as Iraq and Afghanistan, together with unilateral operations elsewhere, it looks less aberrational. Limited actions hopefully are more likely to be the style of Australian participation in future wars. The Boer War is thus coming to be seen as more and more in the mainstream.

Country towns tell it true. In some of them, later war memorials take their alignment from the Boer War one. Coming as it did just as we were entering Federation, the Boer War caught Australia on the hinge of history. Protocols for notifying the Australian government of important decisions involving our soldiers were not yet in place: Prime Minister Edmund Barton heard of the execution of Morant and Handcock only from a returning soldier. Such disregard, as well as other tensions, fed a determination that, in future, Australian troops abroad would be under Australian command.

Meanwhile there remains what some see as the unfinished business of the Morant affair. Scapegoats of the Empire , George Witton the third man memorably entitled his account of the affair. The title encapsulates the argument that the Australian troopers were sacrificial victims to a broader cause. And it is a striking fact — if generally unnoticed — that the two men were shot on the national day of the Transvaal republic.

As the British were anxious to bring the war to a close, and induce the Boers to surrender, this is scarcely likely to have been a coincidence. Even so, there are serious difficulties in endorsing the campaign to secure pardons for Morant and Handcock.

Apart from that, the argument that the pair should be pardoned on the basis of irregular procedure in their trial is fallacious. Title: Gallipoli. Essay Details. 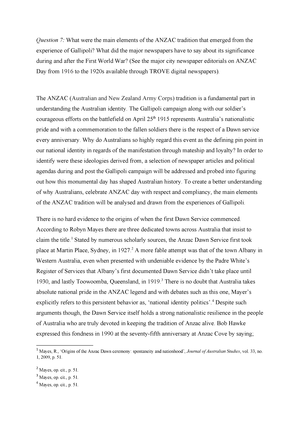